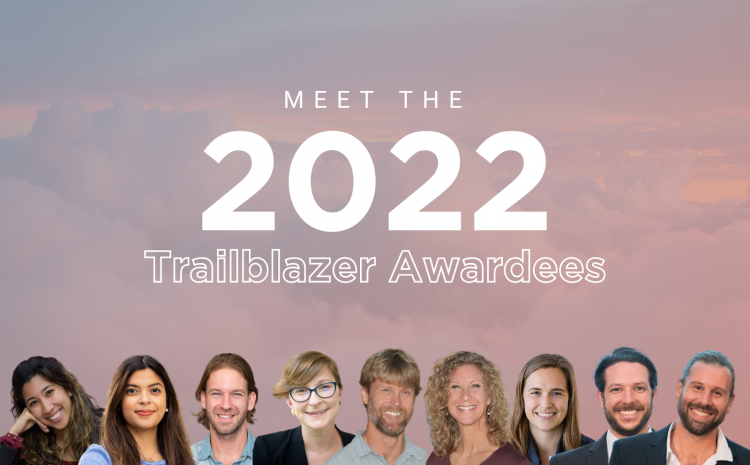 The Trailblazer Awards celebrate leaders who are working to build a net zero future. This year’s awardees include changemakers from various industries who are making an impact in the areas of carbon, climate, equity, ESG, net zero, resilience, and more. The 2022 Trailblazer Awardees are as follows:

In addition to delivering the Trailblazer Gala’s Keynote address, Lindsay Baker was the recipient of a Trailblazer Award. As CEO of the International Living Future Institute, Lindsay is the organization’s chief strategist, charged with delivering on its mission to lead the transformation toward a civilization that is socially just, culturally rich, and ecologically restorative.

Lindsay is a climate entrepreneur, experienced in launching and growing innovative businesses. Her introduction to the green building movement began at the Southface Institute in Atlanta, where she interned before entering Oberlin College to earn a BA in Environmental Studies. She was one of the first 40 staff members at the U.S. Green Building Council, working to develop consensus about what the LEED rating system would become.

She then earned an MS from the University of California at Berkeley in Architecture, with a focus on Building Science, and spent five years as a building science researcher at the UC Berkeley Center for the Built Environment.

Lindsay applied her experience around the study of heat, light, and human interactions in buildings to a role with Google’s Green Team, and later co-founded a smart buildings start-up called Comfy, which grew over five years to 75 employees and a global portfolio of clients. She was the first Global Head of Sustainability and Impact at WeWork, where she built the corporate sustainability team and programs from scratch. Lindsay is a Senior Fellow at the Rocky Mountain Institute, and a lecturer at UC Berkeley. She serves on several non-profit boards, and is an advisor and board member for numerous climate tech startups.

Peter Dering is the founder and CEO of Peak Design, a San Francisco-based company he started in 2010 that makes photography, outdoor, and lifestyle carry gear. Since launching Peak Design, Dering has overseen 10 Kickstarter campaigns, raising $34.4M and proving the validity of crowdfunding as a method to maintain financial and operational independence from outside investors. Growing acutely aware of his company’s increasing carbon footprint, Dering co-founded Climate Neutral: an independent non-profit organization that enlists private businesses to achieve net-zero carbon emissions through a simplified, four-step process. In recognition of his work with Climate Neutral, Outside Magazine named Dering as a 2019 “Outsider of the Year.”

Dering’s Trailblazer Award was presented by Kate Williams, CEO of 1% for the Planet.

Growing up at the foot of the Sierras, Michelle and Jeff developed a passion for the outdoors and people’s connection to the natural world. Engaged in the family businesses, Michelle pursued a degree in Business Administration from California State University, Chico so that she could help the companies grow. Jeff’s passion led him to a Fisheries Biology degree from Humboldt State University, where he worked in the Fisheries field before moving back to Chico to work alongside Michelle and their dad. For over 17 years, they have been dedicated to all things Klean Kanteen, keeping it a family- and employee-owned-and-operated company. They have touched every functional role from driving forklifts to being the driving force behind the vision, mission, and culture of the brand as they serve as Co-CEOs.

Michelle is a selfless leader whose unique passion for people and family is the touchstone that is felt throughout Klean Kanteen. You will find her sharing her smiles and “fun-ness” with staff, trail running, or spending time with her husband and kids. Jeff is an unexpected businessman and a passionate leader who stewards the brand with his exceptional sense of self and community. He is often found checking in with the folks at Klean Kanteen or daydreaming of mountain biking, trail running, fly fishing, or free flowing rivers. Jeff and Michelle’s Trailblazer Award was presented by Kate Williams, CEO of 1% for the Planet.

Darcy Shiber-Knowles is the Director of Operational Sustainability & Innovation at Dr. Bronner’s, a sustainability-minded producer of organic soap and other personal care products. She is passionate about food, environmental stewardship and community building, and is an accomplished singer and practicing yogi in her free time.

Dr. Bronner’s is an esteemed B Corporation, a business meeting high standards of verified performance, accountability, and transparency on factors from employee benefits and charitable giving to supply chain practices and input materials. Darcy was featured on NZ22’s Environmental, Social & Governance (ESG) Panel.

Sandeep Ahuja is the CEO and Co-Founder of cove.tool, the end-to-end building performance and data app. Most recently, Sandeep presented at the UN Environment Assembly, with 1500 global delegates, on the impact of buildings on climate change, showcased at the Tedx Atlanta, and was featured in Forbes’ 30 under 30. Additionally, Robert Downey Jr.’s FootPrint Coalition contributed to her Series B funding in 2021.

With her desire to bring automation into the AEC world, she is pioneering the integration of data driven thinking into the design and construction process by developing intelligent software.

Mercedes-Benz Stadium, home to the Atlanta Falcons and Atlanta United, was designed to be the most sustainable sports venue in the world. In the U.S., the venue is the first professional sports stadium to achieve LEED Platinum certification. Mercedes-Benz Stadium’s sustainable design was born from the vision and commitment of Arthur Blank, owner of the Atlanta Falcons and Atlanta United.

Kristy Drutman is a Jewish-Filipina environmental media creator and founder of Browngirl Green, a media platform exploring the intersections between media, diversity, and environmentalism. As a sustainability communications expert, Kristy has spoken in front of thousands as well as facilitated workshops centered around environmental media and storytelling in cities across the United States. She is also the Co-Founder of the Green Jobs Board, an online platform bridging the equity and inclusion gap within the green economy.